Girl Adventure is about three Girls named Mistey, Greenchu and Sylvie who go have an adventure. What will happen in the area of Skulls? There is a mystery to be solved about the skulls. Collect Skull Tokens to figure out the truth. There are twentey-four levels. The game saves after each level. The challenge level is medium to high. The challenge style is action and puzzle. The length is ten to ninetey minutes. The game has no music and sounds so you can play in the darkness. Have fun and figure out the mystery.

Warning: this game contains Swear Words such as fuck.

thank you for this game. i really enjoyed it! i feel like i truly know the meaning of Girl now :3

Is this a follow-up to that "Girls World" thing you made in Bitsy??

Its not related except that they both are about Girls.

I still do not fully understand why what I did in the first 5ish levels worked, and the levels are difficult in that they require precision and forethought, but the rewind mechanic removes most of the tedium most "precision" platformers give. I have a few nitpicks I would have chosen to implement slightly differently, but to do so would erode at the pure soul presented here. Each level is crafted around the mechanics being exactly as they are, and does so well while not overstaying its welcome.

Thanks so much for playing the game.

this is a very good game.

Thank you so much for saying it.

This is pretty great game :) I am stuck in level 5 but will figure it out soon :) Thanks for providing the secret link :)

Level 5, it is known to be quite difficult. Good luck and thanks for having the adventure.

Love a game made with the Sylvie design ethos in mind and this is one of the greats!

Thanks so much, I will continue to be Sylvie.

this is a good

Thanks, your a good.

I wonder if the diamonds are edible

I reccommend don't eat or you might be destroyed.

I hope that is good. Thanks for having an adventure. Sylvie

I just beat the game and I am now a skull

I just told all my friends so they can become skulls, too

Thanks for playing. You don't have to be a skull if you don't want, but it's up to you.

Can't wait for you!

I seem to have difficulty being able to move, I tried every button on my keyboard, can you help me?

That is very strange. The arrow keys and WASD should both work.

Do you have a gamepad plugged in? This game is not really meant for gamepads but the base-code I used has some gamepad support stuff in it. Maybe that is interfering with the keyboard controls somehow.

If that is not the issue, are there any other problems with the game? For example, are the animations playing or is it completely frozen? What operating system are you playing on?

The animations of everything are playing fine, but the character doesn't move at all, I have no additional gamepads plugged in, hmm

Does the character have a little heart and a little blue number above her head? If not, that would explain why she isn't moving, although I don't know why that wouldn't be there!

I will upload a version in a few minutes with the gamepad code removed, in case that code is causing the issue somehow - I can't really think of why else this would happen....

Yes, when the game starts there is a blue number that starts at 40 and decreases to 0 very quickly

Aha! It sounds like it is detecting the Up key or W key being held down. The character cannot move up and left/right at the same time, so left/right movement is being blocked.

Can you think of any reason on your end why it would detect one of these keys as being held?

It's taking me longer than expected to upload a new version because I found an unrelated bug, but if it's caused by the gamepad code, I'll have a new version with that code removed pretty soon.

the levels do a good job of teaching you about the world of the Girls and making you feel clever about learning how to use their various powers. it's always a treat to explore the new and unique mechanics of a sylvie game. thank you for another cute journey!

Thank you so much too for the cute journey of your comment :-)

Rather sadistic in terms of its level design, however enjoyable and memorable. Played on Linux with Wine, it works.

Thank you, I am glad you enjoyed and remembered it.

Interesting and fun mechanics where a surprising amount of interesting behavior comes out of minute fiddling with key tapping and exact pixel positioning with the game's neat rewind mechanic.  The level design, characters, and writing always kept me wanting to progress to see the next level. I cannot pick a favorite out of the 3 Girls.

I quite like the level design - whimsical and sylvie-ish, yet methodical in terms of exploring the mechanics, avoiding redundancy, and having a decent difficulty curve. (For the intended audience - someone decently skilled at platforms and who has a bit of patience.) Thanks for making this memorable little game! :)

Thank uou, I am so glad you had a good adventure. 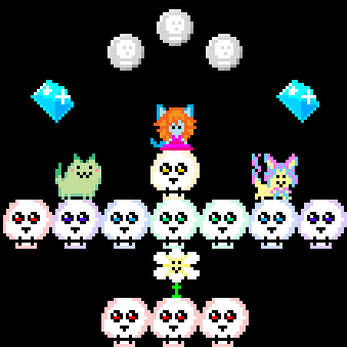