A cute platformer featuring Sylvie, what could possibly be more fun?

* You are able to rewind time in this game. If you don't close the game, you can rewind very far, but not forever. However once you close it, only a little bit of your rewind history will be saved, due to file size limitations.

this room with the spikes is literally impossible.

edit: you can push the spikes as they're falling. makes sense!!!

hi Sylvie i was playing this and thinking to learn to play through it all the way in one each time. it's like a touhou music album experience!

I was getting discouraged in getting a bit stuck or trying to do too much at once and i was leaving but saw the thinking about boxes.. i have a good idea i want to add the word mystery to the thinking,

mystery like yume nikki where you loop around looking at a thing (even if nothing is put in there and it's just the screen loops). i have somekindof less memory and have looping around in games as a what puts them to brain instead of special moment (maybe). not remembering particular experiences and moreso collecting very clear boxes and well some arrangement in space to keep them around.      it was a while ago thinking just that and what to add.. feel more towards able read goings on like in game the part apart from able hit inputs of able recognize what input memory time. (you know but like super hexagon where hit the moves and remember the shapes)

also there was talking in as 'reward things'. you know more history but i like there was just a thinking from sakurai the one where a reward was like just in a contrast from a difficulty. it makes sense with like sad in things becoming more stressful or upsetting, and accustom baselines settle in a life such things..      in a plainly 'cool' game like need for madness, to make it opaque i can imagine it giving more a sense of what exactly you discovered! but what kind of opaque is that, just starting from a baseline?      so that could be the difference between the types of reward. a better sense of the change.. something like,

so then it's the type of opaque or well in only games that are beautiful world, with opaque as extent the beautiful is new, then the spectrum is just in what degree of world is being shared - no because can be any degree of world just different degree of barrier? the barrier as how much world can move to, i suppose away from base genera expect or playstyle. - then vs just putting something away, its like learn how to find it within your life. i think it generalizes..

well in culture baseline of around beautiful world or going everywhere to find what things or everywhere beautiful parse as to enable..  - you can go everywhere and collect it but engaging with a mystery in a if it can change anything for you way.. like you have hobbies\loop to have a sense of you in the first place, so the changing that..

well this feels like one complete point at least and i can lens your writing differently if i can remember what is applying where.. maybe i will edit this one if not the just keep going or what

really like the music in this game. can I get it somewhere?

Thank you! I don't have a proper webpage for it but I grabbed the songs from the game files and put them up here: http://love-game.net/sylvietower_ost.zip

wow this feels iconic and like a little packaged representative, like part of a big series where still each episode gives the same of the what the whole thing does to an extent,

also it felt that distinctly thoughtful to an extent as opposed to that feeling like 'just in a space' or what, which i guess is also that already subscribed series following aspect, partly, but yea un/identified nice things overpowering identified missing things someway,,

also thinking to clear up for this comments, even if it is 'hard', since it's iconic it's likely familiar and so not actually hard feeling. especially with the rewind, although i did autopilot forgetting about it until after eventually beating some of the levels lol

umm that is all will tk here for now i guess with it left to my misc, ty too,

hard game. and i liked it also i think you should continune developing this game and a multiplayer mode would be nice

Its hard. Its really hard.

This game is extremely good and everyone should play it.

Additionally, having rewinding in games like this should be a default expectation. It's been nearly 15 years since Braid, and somehow Sylvie is the only one to realize this obvious truth!? Get it together, videogames.

this was a solid entry in the sylvielike platforming genre. loved jumping on the little rats and the eerie final boss. great game! 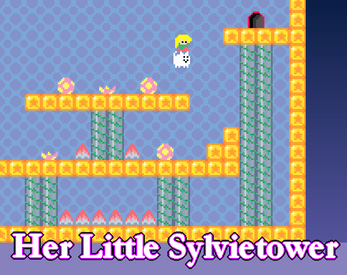